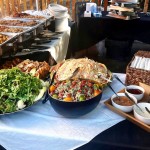 We travelled south west last weekend to cater for a 30th birthday party with a hog roast Criggan. It was an evening event at a lovely little quaint public house literally in the middle of no where! We arrived a few hours before hand and were shown into the back room to set up our machines. The room was covered in banners and balloons for the guy’s birthday and it was in fact a surprise party organised by the guy’s wife. We chatted to her as we set up our machine and she was ever so worried hoping that he would turn up! We told her not to worry and we set about making the hog roast Criggan. We placed chicken, lamb and beef onto cook and as the meats were cooking we started to make some spicy wedges simple but delicious, we cut the potatoes into wedges drizzled them in oil then using an assortment of herbs and spices we covered the potatoes in them and put them on to slow cook. The smell of the meat, herbs and spices together was mesmerising. Our chefs soon had the salads made, coleslaw and dip in bowls and then started to cover the tables in all types of bread buns and rolls. Just as the hog roast Criggan was cooked the guests arrived and the room fell silent as someone said, “ he’s coming” and as he walked through the door he was met with a huge roar of “surprise!” to say he was shocked was an understatement.

As he composed him self and was wished a happy birthday by the guests he headed over to us and was speechless as his eyes looked at all the food he said he was gobsmacked! We offered him a plate and filled it with the meats he kept shaking his head as he ate and between bites he said our food was the best he had ever ate and he said he had dined in some of the finest restaurants in the world with work but none came close to ours! Well that was the best compliment we have had to date and there has been many.