Great weekend travelling to a school in Chertsey, Sir William Perkins School for girls, there were two days of Shakespeare which needed food. The obvious was a hog roast that could feed three sessions of 120 guests in half an hour. The set up was wonderfully organised, just outside the heads office! The matinee service was at 7.30. It was great to watch all the performers rushing from one area to another. There were two cameo plays of Much Ado and the Tempest. 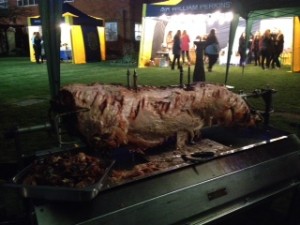 7.30 On the dot everybody piled out, and there was a queue. All went to plan for hog roast Chertsey with most eating within 20 minutes. It was a quick tidy up to be ready for the next day. I even had time to listen to a bit of Rugby – England beating the Welsh. A brilliant day. It was then a slightly later than usual start, setting up at 8 and starting to cook as soon as possible so I could be ready for 2.30 and start serving at 3. All was good and they were even time for a bacon Sandwich. It wasn’t long before I started the second roast which was for 7 for service at 7.30. It felt a little bit like a conveyor belt system. All worked well with the busiest being the evening session with nearly an extra 40. Fortunately the pigs were larger than we needed and so organisers were happy to take left overs home.