Tia and Clayton have been customers of ours for a long time now, and we’ve catered lots of their personal occasions over the years, such as birthday parties and a christening. Now that they’ve formed their own catering business, however, the couple wanted to hire one of our hog roasting machines with a view to buying one in the near future. The couple had yet to have a DIY hog roast of their own, so I went along to their family home to teach them the basics.

When you rent one of our machines, we don’t just drop it off and wave goodbye; we want you to be comfortable with it and with cooking meat in this way, so we show you how to use it and how to prepare your meat if needed. As Tia was at work when I arrived, I showed Clayton just how easy it is to use our equipment and how to prep the pig so it’s moist and salty. 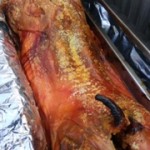 I’d brought along a medium-sized free-range pig that I’d sourced from one of the local butchers that we’ve dealt with for a long time now, as we know they provide quality ingredients. Salting a pig after wetting and scoring it produces that lovely crackling that everyone loves, and Clayton took notes as I explained, as he wanted to tell Tia everything she had missed. Once done, I would simply have to turn the machine on and set the temperature, and Clayton asked what would come next. Well, aside from checking that the meat is cooking and the flame stays lit, that’s about it! Clayton was more than surprised, despite being a long-term customer of ours, as he’d expected it to be much more fiddly. I left him to it and looked forward to collecting the machine a couple of days later.

When I returned to see Tia and Clayton, there were tales of near-perfect meat and crackling at the family party they had held to test out the machine. They both kindly agreed they had far to go for it to be as tasty as ours, but then we’ve had three decades of experience now! Nevertheless, the couple are visiting our showroom this week to purchase their own machine, as they know it will be a big hit with their catering service.