Not all of the events we handle here at Hog Roast Wentor were organised out of the need for a traditional celebration. Some, like the charity fundraiser we were invited to attend earlier this month, can be bittersweet. 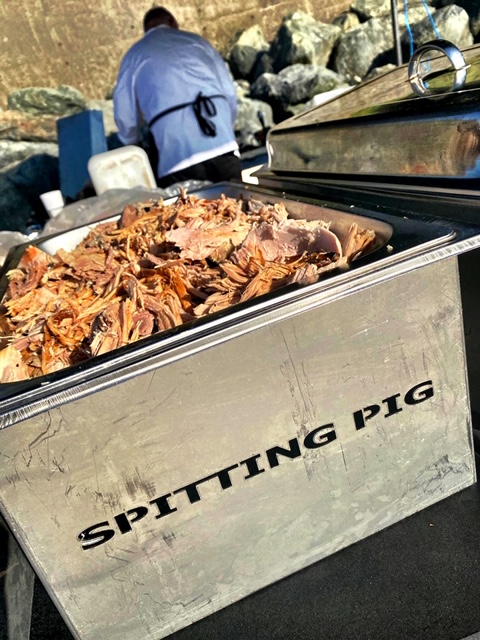 Following the devastating loss of their 14-year-old son, Angus who recently passed away after being re-diagnosed with brain cancer six years after beating the disease, devoted parents Alistair and Adele decided to plan an event in his memory. Their goal was to do something that would allow them, as well as all those who knew and loved Angus to reflect on, and celebrate his life while also raising vital funds for the CLIC Sargent charity.

What they came up with was a 7-day-long 230-mile walk, beginning at Dean Close School gates where Angus had made lots of happy memories, and ending at Deer Park on the Pembrokeshire coast, overlooking Skomer Island which was his favourite view.

For this event, Hog Roast Wentor were more than happy to travel further afield than usual, and so, preparing to feed 30 hungry mouths, the catering team made their way to the Broadway Camp Ground at Broad Haven beach where they spent the afternoon cooking up a glorious spread. Once complete, the feast consisted of a half of a pig which after being slow roasted was carved up and served alongside all the traditional trimmings, grilled vegetable and halloumi skewers, juicy gourmet, mixed salad, homemade coleslaw, gluten-free rolls and bowls that overflowed with colourful fruit.

With a few hours still left to go on their journey, the walkers were grateful to pause their walk briefly to enjoy the oceanside breeze and the hog roast treat before continuing on their way to reach their final destination.

It was an absolute privilege for Hog Roast Wentor to be included in this event, and we are pleased to share that the Just Giving campaign that was set up in Angus’s memory by his family, has so far managed to surpass £17,000! All of the money raised is being sent straight to CLIC Sargent, a charity that provides vital support for young people with cancer and their families.