Proud new home owners Vicky and Adam recently bought some pork from Mount Grace Farm Pigs for their housewarming party and they wanted to let us know how much they appreciated the quality of the meat and the service they received! They had finally found themselves the perfect house and the first thing they wanted after they got the keys and moved all of their stuff in wasn’t unpack-it was to throw a housewarming party to show off their new abode to all their family and friends! They wanted to do something a bit out of the ordinary and not what their guests would be expecting, so they decided to hire a hog roast machine to cook a joint of pork out in the garden right in front of their impressed guests! They confessed this wasn’t the only reason they wanted to cook outdoors with hired cooking equipment-they told us their new oven hadn’t arrived yet and the house was so full of boxes that they didn’t have the means or the room to accommodate everyone inside the house!

Because the couple were so eager to welcome everyone into their new home, the party preparations were all a bit rushed and last minute, especially with their new house still being in chaos! It hadn’t initially occurred to them when they decided to have a hog 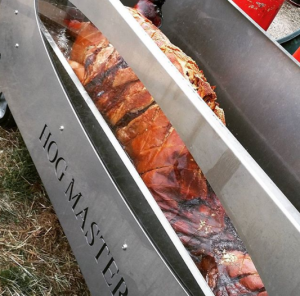 roast that they would struggle to find some top-quality meat that wasn’t going to cost an arm and a leg, and with only 2 days to go before the party and their guests at risk of going hungry, Vicky and Adam were starting to panic and were considering calling the whole thing off. They looked online and couldn’t seem to find any pork that fitted their quality, budget and time requirements, until they came across Mount Grace Farm Pigs! The more they read about the high standards in which the pigs are reared the more certain they were they had finally found the meat they were looking for at a price that was within their budget! But would it arrive in time for the party? The answer to that was of course yes! A mere 24 hours after Vicky and Adam’s order was submitted, the high-quality pork was delivered fresh to their doorstep!

The couple wanted to thank Mount Grace Farm Pigs for the great meat and speedy service that made their housewarming party a big success!