Last week one of our popular Titan machines was hired by Chris, the ambitious new owner and Head Chef of a local restaurant that had seen better days. After a much-needed revamp, Chris’s wanted to completely change the ethos of the former eatery and the quality of the food. He was determined to prepare all of his dishes using only seasonal, locally-produced food, which meant his menus would change dramatically depending on the time of year and availability of certain produce. This was a risk Chris was willing to take, as he felt local cuisine was badly under-represented in the area and he was hoping to make people fall in love with it all over again once they had tasted his food!

For his launch night, Chris had carefully planned his menu around the fresh summer produce that was available to him, including some fantastic, ethically -reared pork. He didn’t want to cook it in the oven though; he wanted to cook it in full view of his guests to add a bit of theatre to the proceedings! He was thinking about hiring a hog roast machine but wasn’t sure if was suitable for use indoors if the weather let him down and as he had never used one before, he didn’t want to run the risk of not cooking the meat properly and his opening night being a disaster! 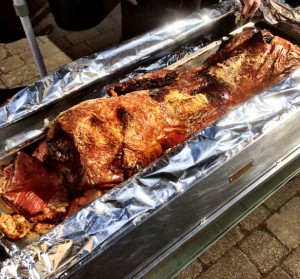 We put all of Chris’s concerns to rest when he contacted us and we suggested he hire the Titan Machine, which as Chris now agrees, is a great piece of equipment for a hog roast beginner as it is practically fool proof, as well as being robust enough to feed a restaurant full of expectant diners, yet compact enough be operated indoors in the event of a downpour!

When we came to collect the machine the day after his big night, Chris was grinning from ear to ear and told us he had never received so many compliments about his food before, as well as it being the ideal centrepiece to get all of the guests talking! Also, because he was cooking in front of them, it gave him ample opportunity to chat with his diners and extoll the virtues of his home-grown dishes, not least of which was the succulent pork which the guests could watch cooking.

Thrilled with the Titan’s performance on what was such an important night for him, Chris has decided to buy one for himself, so he can continue impressing his diners on a regular basis!