For some months we had planned for this event. I had travelled to Killingholme to the Humberside Oil Refinery. Lee, the Chef Manager had stated the importance of a site visit. It soon became clear of the various unique issues that needed to be covered. The site was an Oil Refinery and therefore Health and Safety were paramount. The first thing to do was to watch a brief Health and Safety video. I was then allowed (under escort) to look at the various locations for cooking the hog roast in Immingham. Once we had looked at various areas we had to contact the site Safety Officers to clarify what was possible and obviously without risk. After several conversations it was established that it could work. However it had still to be signed off. It was decided that the 20th March was a good date and it would be needed for about 500 workers, though not all the 13000 workers on site. We awaited approval. 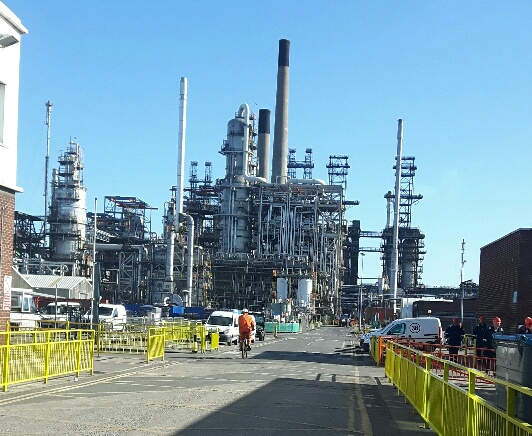 Well on March 6th I had an email confirming the go ahead for 10th March for 500. A little later it moved to the Thursday 9th March. I was relieved it was my birthday on 10th. I sorted the pigs and rolls etc. + accommodation, which would be needed to be on site at 3.45 am. Indeed we contemplated travelling up through the night. However the accommodation option was proving more attractive. However a little later there was a voicemail and email. Could we provide it for 1300. In other words – the whole site. This would have to be it three waves of half an hour apart. After a little bit of thought and a few phone calls I put a plan together. Everything was in place and Lee pressed the button to proceed.

We travelled up on the Wednesday evening arriving at our accommodation at just before 9. Great I thought, just in time for food. Oh dear, the kitchen closes at 9! Perhaps they should have corrected that to 8.55…. However, undeterred we headed for Brigg and found a curry house and indulged. We were starting to be mindful that we would have to be on the road at 3.30 am. It was therefore quick departure and straight to bed. As always a lousy night’s sleep, well three hours to be precise waking up every ½ an hour! We arrived at Philips 66 at 3.50 am and watched the H&S video. A very strange thing to be doing. We quickly set up and got roasting the hog roasts in Immingham. The weather was fine and the wind was hardly noticeable. My site visit had revealed that the area could be like a wind tunnel. As the morning progressed the wind got up and made life rather tricky. We eventually moved the machines into the small tent structure, although after a while it became a hazardous place to be. We survived and had everything ready for 11.20 just as the workers arrived. It was then non-stop until 1.00. We served just over 1000, everyone was happy with positive feedback. Another great day with just a long drive home.